Ikaruga can be defined in two simple words: Bullet Hell. Games in these genres are maddeningly difficult due to the incessant amount of “bullets” flying around your screen as you attempt to avoid them and shoot down enemies in return. There are tons of other games on Steam under this genre, like Jamestown, but Ikaruga sets itself apart from the others with its notorious difficulty and steep learning curve.

Bullet Hells are easy to get the hang of eventually, but Ikaruga’s twist is going to ensure that that is not going to happen with you any time soon. All bullets are either black or white and your ship can switch between black and white. Only bullets of the opposite color can destroy your ship, e.g. you can tank white bullets if your ship is white.  In addition, hitting enemies with the opposite color inflicts double damage.

It’s… overwhelming. Give it a try and you’ll get a run for your money.

This game. This freaking game. Super Meat Boy has been the poster child for difficult games for a while now. It starts off simple enough but quickly ramps up the frustration to insane levels, so much so that you can find videos on YouTube of people  suffering through the game while screaming their heads off in rage. Yet even so, it’s all strangely addicting.

The fun of Super Meat Boy really comes down to two simple things: 1) the movement is slick and responsive so you know that every mistake was truly your own fault, and 2) the respawn after death is instant, which leaves no time for you to even consider quitting. Success is always just within reach, making it that much more infuriating when you fail.

But it’s a good kind of fury – the kind that floods your veins with endorphins when you finally succeed. And that’s why we play games like this, isn’t it?

This is the game that revitalized the wonders of the idea of an extremely difficult game. It’s Dark Souls! Which game? Take your pick; there are a couple lying around on Steam that you could buy for a steal. Wait for a flash sale or maybe the next big sale to get them. You certainly will not be disappointed.

If you’ve no idea how this game plays as, think of Monster Hunter meets Warhammer; a vestige of high, dark fantasy that’s been near non-existent in modern times with a dead simple control system. Fight gigantic monsters, undead humans, and a whole bunch of other stuff in this medieval, post-apocalyptic world. Every encounter, even with just grunts, can be an absolutely brutal experience. Dark Souls isn’t the first in its name though as it is only the spiritual successor of the game, Demons’ Souls released on the Playstation 3, though both are still from the same developer, Fromsoftware.

Don’t mind the accusations of overhyping; the Steam keys are damned well worth the price tag. Which Dark Souls? Take your pick; you won’t be disappointed.

With a huge band, the Steam Summer Sale of 2016 kicked off this June 23rd as it Steam tradition would dictate. Tons of games are up for grabs on sordid discounts. Not even AAA titles are safe from the price slashing.

If you haven’t made it a point to browse the game platform’s wares yet, we suggest that you go take a good look now before your the sale ends on July 4. This may be your biggest chances to buy amazing titles such as the Witcher and the Borderlands series to raise your Steam account value.

There are literally tens of thousands of titles to buy and take advantage of the the Steam summer sale with. This does, however, serve as a problem for the more discerning gamer with specific tastes. Due to the massiveness of the Steam marketplace, it can be hard to sift through the crap to find the few gems hiding beneath the dusty veneer of mediocrity.

We have a couple of tips that just might cinch it for you, saving you precious time and, most of all, money.

Steam Account Value: The Tips and Tricks of the Trade

These are normally on the front page of the Steam store and there’s a new one everyday just like on normal days. Always check out the games on highlight as these are the most discounted of any other game, ranging from 50% to 75% discount. Of course, if you don’t find what you like, there’s really nothing we can do there.

It would be more advantageous to have a better reputation outright due to the 15 day wait before the sale of any unverified trading cards. But selling rare cards or a ton of popular ones in bulk at the start of the sale could yield some interesting profits for you. Remember that you should never buy cards at the start; once the market is saturated with tons of trading cards due to the large influx of games bought and played, that’s when you can go nuts. You’ll most likely get a really good investment with this.

3. Don’t be greedy for more discounts

“What you see is what you get.”

This is a philosophy that Steam’s been adapting more and more with their massive sales like these. Back in the day, you’d get a 33% off sale on a specific game only for it to go even lower a few days later. This time around, the discount found on Steam games in these sales won’t ever go lower until after a few more months, and sometimes, it won’t even go lower. In fact, it can go against you and have a smaller discount compared to the Summer sale by then. Don’t be cheap and just grab a game you like if it’s in the right price range this summer sale.

So you just found a game that’s only for a dollar. It aesthetically looks good and is your kind of genre. Even for that low price, check the reviews and other third party sources. Take your time before you invest in a game; no matter how cheap it is. Because, if you don’t, you’ll more likely end up with a bunch of crappy games that have no bearing on your Steam account value.

5. Check out Our Latest News on the Summer Sale

Take a look at our own listings on Steam games that are on sale for a specific day and you just might even find recommendations from other users about specific games. But, in the end, nothing’s ever wasted on your Steam account so long as you actually like what you buy. Don’t be shy, but be careful with your purchases. Happy hunting, everyone!

So, this Steam Summer Sale is just as insane as any other Summer Sale, but it may just be the craziest one yet. Late 2015 to early 2016 has been a pretty amazing year for gamers in general with so many good releases like Dark Souls III and a bunch of other games that I really don’t care about. With that said, you know you’re going to hurt your wallet with the tons of games you will want to buy that increases your Steam account value. Past this nifty little vid about how awesome the sale is going on right now is a small list of the first two days of the sale, July 23-24, so that you can plan out your purchases, if any, much better than just rummaging through the Steam store and inadvertently choking the life out of your Steam account with unnecessary purchases.

We’ll be updating this page for every day that there are additional information on the new sales until the very end.

Enter the Gungeon is a game in the form of classic Bullet Hells, but in dungeons! There haven’t been many to put two invariably separate genres together, especially considering that Bullet Hells are done in spacious, fast-paced, and linear stage tracks while Dungeoneering is especially more focused on quiet strategy and exploration of labyrinthine networks. Again, it really isn’t something people marry together, but it’s an interesting concept entirely.

You pick one of several characters that each have unique stats, weapon specialties, and abilities. But the best and greatest character in Enter the Gungeon is… wait for it…. the bullet. Yep, you heard it right folks; you can play as a bullet shooting bullets at other bullets that shoot bullets at other bullets. Bulletception. But the best part about this character is that he actually starts with, and I kid you not, a sword. Called Blasphemy. Cuz, you know, he’s a bullet using a sword. With every character being just as interesting or even more than the last, Enter the Gungeon has that one character everyone is going to love. 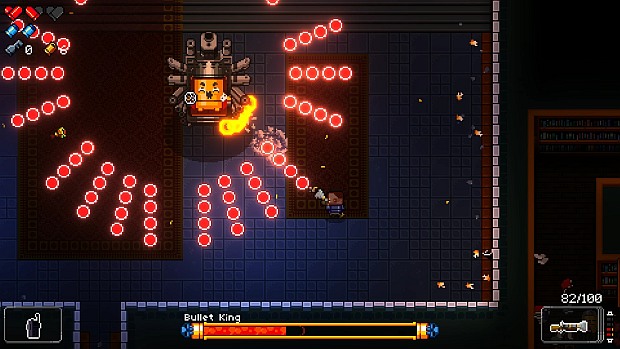 The “Gungeon” itself, the playing field, is an ever-evolving landscape that have been meticulously designed and hand-drawn, but, at the same time, procedurally generating new rooms and landscapes based on the performance of players. While everyone starts out in the same area, the next few rooms will be different on how fast, how good, and what method you dispatched foes with in the previous areas. There’s no similar experience for each playthrough and things just get harder and harder. The game will easily pick up if you’re too good.

Again, even though it’s bullet hell gameplay, the strongest dungeon element in this game is that there is actual progression, shops, currency, and equipment you have to manage, akin to old school dungeoneering games like Legend of Zelda or Alundra. With tons of hidden rooms and secret treasures, there’s just so much content to be had in Enter the Gungeon. What makes this ever more awesome is that there’s actual multiplayer that you can partake in. Unfortunately, you can only connect via LAN as the game does not support online at the moment.

The best part, however, is that Enter the Gungeon subscribes to the Diablo and Borderlands philosophy of HOLYCRAPLOTSOFLOOT. It’s undeniable that loot-based games have a powerful pull on our psyches. With hundreds upon hundreds of guns to be looted, bought, or stolen, Enter the Gungeon will keep you busy for hours on end with its amazing looting system.

Unleash everything from the tried and true medley of missiles, lasers, and cannonballs to the bizarrely effective volley of rainbows, fish, foam darts, and bees! Yep, bees.

Yeah, that pretty much sums it up

Redeem Steam code or buy Steam Cd Key for Enter the Gungeon and tons of other bullet hell and/or dungeoneering games at PlayerAuctions.